On December 27th me and Tina took a day trip to Osaka to go to the 2.5d Cafe there.

The interior of the cafe was basically the same as the one in Tokyo (I’m certain they just cleared out all of the decor and equipment from the one there and shipped it all to Osaka) except that thankfully it was all on one floor and therefore did not have those horrible wooden slippery steps. The picture at the top of this post is Mikazuki and Kogitsunemaru’s outfits that were on display in the cafe. We were lucky enough to be first to enter the room, so we were able to claim the table right in front of them.

Before buying anything, we were talking about whose coasters we wanted to get. I chose Mikazuki as the one I wanted most, and clearly he heard me because the amount of Mikazuki that came to me (out of all of the ones that could have come) was bordering on ridiculous. In the end I did manage to get a little variety, but Mikazuki really did want to come to me that day.

We went in the cafe twice that day, once on a same-day ticket and then once more with our reserved tickets. Out of the seven drinks I bought that day, three of them were doubles. Although it is fun to try new drinks, knowing we would only be there once I really wanted to take advantage and drink the drinks I knew I really did like a lot. Now I think about it afterwards I probably should have taken pictures of the drinks without the coasters, but at least you get to see who I ended up with.

Nikkari Aoe’s Cola & Blue Currant. This is a really weird tasting drink which perfectly suits the character, but it’s actually my favourite of all of the drinks I’ve tried at the cafe. With all the sweet and sickly drinks I usually end up drinking at these cafes, this one is surprisingly refreshing.

Imanotsurugi’s Popcorn Latte. This was one of my favourite drinks last time and I’m really glad that they brought it back last time. It actually tastes of popcorn (we eventually concluded that it really tastes of the flavouring they use in caramel popcorn) and is really sweet. On the top there is actual popcorn which was salty and delicious. 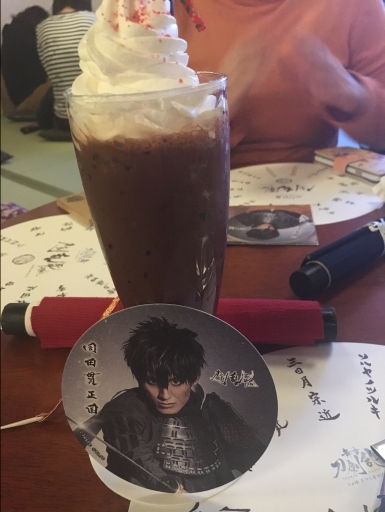 Ookurikara’s Coconut Cocoa. Cocoa is always my drink of choice anywhere I go and this one did not disappoint. It was super chocolatey (I’m pretty certain it was more chocolatey than it was when they had it in the Tokyo cafe) and I could really taste the coconut too. I could drink a thousand of these if we weren’t limited to only 3 drinks.

Mikazuki’s Blue Moon. This drink felt super classy because of the glass it was in and the lack of straw. There was a crescent moon-shaped lemon slice on the side, and gold sprinkled over the ice. Despite the blue colour for me the overwhelming and recognisable taste was cherry, the taste of which remained in my mouth for quite a while (not in a bad way, though).  And of course, out of all of the coasters that could have come my way, he appeared one more time with his own drink (the third and last time he came to me that day). 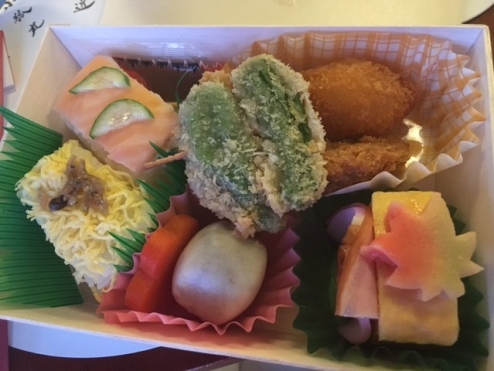 For our reserved ticket we also got a bento included which looked like this. Honestly, you could definitely get better food for the price at a real restaurant, but really, you’re paying more for the experience when you go to a collab cafe like this. I enjoyed eating it though, especially the little tamago with the leaf on top in the bottom corner! I gave the goya tempura to Tina though because that was the one thing I really did not want to eat. 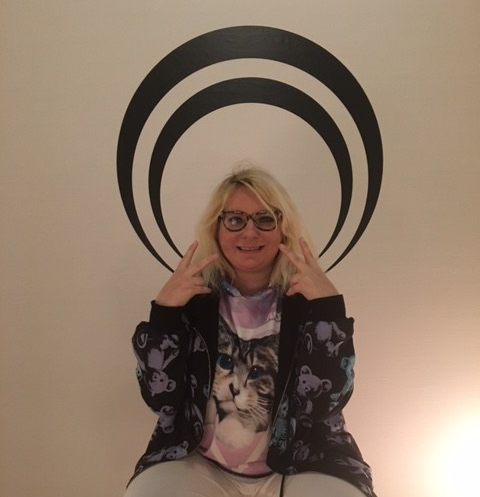 The corridor leading to the cafe had the symbols for each sword featured at the cafe on the walls. On my way out, I couldn’t resist taking a picture with Mikazuki’s crescent moon since he was so eager to be with me that day.

Also at the cafe is a store and lots of gacha. I had so much luck with the Ranbusai gacha (which I didn’t actually try when we went to the show because the lines were so long) and completed my Mikazuki collection as well as getting one of Kashuu’s badges too. I’m not usually lucky so I enjoyed it while it lasted.

The cafe is open in Osaka until February 28th! If you want to go, you can see the official site for details.