I should have posted this a while ago but I was too busy this week to finish writing it. I really want to write a post about the last show of Seigaku vs Hyotei and about 8th Generation’s graduation, but I’ll get to that after this is posted.

On Saturday 24th and Sunday 24th September, I spent the weekend in Tokyo, my second trip that month. I had originally planned on just going on the 25th as I had a ticket for Samurai Mode‘s afternoon show, but the lure of Tenimyu’s final weekend led me to head there a day earlier in hope of seeing it one last time, as well as seeing Samurai Mode one more time as well. I had to make a post about this weekend because it turned out to be one of the luckiest I’ve had for a while.

My first luck of the day came when we spent a couple of hours at karaoke in the morning. Having already collected all of the Tenimyu coasters I had wanted, I decided instead to try their new Ensemble Stars drinks collab, which would give me free random can badges. The drinks I tried were for Nito Nazuna and Shino Hajime. The drinks were a little too sweet for that early in the morning, but good all the same, and here they are pictured with the badges I pulled: 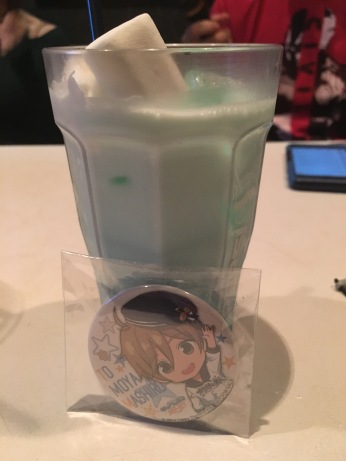 Mika was my first pull, and he’s my second favourite character so to get him out of so many options was so lucky. The second one I wasn’t quite so bothered about, but one good one was enough for me.  With that out of the way, we headed to Tokyo Dome City Hall to try for a ticket.

When we arrived at the venue, the line for same day tickets was crazy. I expected it to be long because it was the final weekend, but the line seemed to go on forever. Not knowing how many seats they actually had available, it seemed impossible. Waiting anxiously with my lottery ticket for the results to come out, I was amazed when I actually did manage to get a ticket. I had to check it about three times to make sure I wasn’t reading the wrong number.

My seat was on the second row, but on the far right side of the room. Because of the layout of Tokyo Dome City Hall, this meant that if I looked forward, I could only see the curtain that blocked off the backstage area. I had to look to the left to see the stage, and some of the stage was out of my view. Having seen the show enough times that I basically knew what was going on in the parts I couldn’t see, I was okay with that. And being a second row aisle seat, there was the positive note that the cast were really close when they came off stage during the encore and when they were on the side of the stage I was sitting.

Having accepted when I saw it the last time in Nagoya that I wouldn’t see the show, or the 8th cast on stage again, it was so nice to be able to see them again after all, and the guys all did great even with the emotion knowing that this was their last weekend together.

On the way out, I received the mini-pillar as usual, and I pulled Ryoma/Kazuki! I already had him from when I’d seen the show way back on the shonichi week, but given how many characters I could have pulled that I didn’t like, I considered getting him a second time another lucky moment in my day.

Once the show finished, I realised I didn’t have time to make it to Ikebukuro to try and get a ticket for Samurai Mode, as I had planned. I decided that I would use my sudden free time to push my luck and try and get a ticket for the evening Tenimyu show. I had no doubt that I couldn’t be that lucky a second time, and after getting my lottery ticket I even went to the food court and bought a meal, thinking I’d have all the time in the world to eat it. I kept an eye on the Twitter, and when the results came out, I wasn’t on the list. However, then the cancellation list came out and miraculously, I was on it! I was number 41, so didn’t hold out much hope, but rushed through my meal and went to line up.

Somehow, my luck came through once again and I got a ticket. It was worse than my morning show, on the third balcony right at one end. I was missing a little more of the stage than the first time, but again, this was fine. I was just happy to be in there again. I discovered the interesting thing about being in this seat was that I could see right through to the backstage area at the side of the stage, and could see people who were about to come on stage before they even got there. I saw the boys climbing from the stands when they were rolled off stage, I saw Jirou’s actor give the thumbs up to someone before coming on stage for his scene where he falls asleep in the middle of the stage.

One particular amusing moment for me when the cast went off stage after the last song before the curtain call. For some reason Sana decided to strip off his top and because they left the curtain open the whole time everyone was coming out for their individual curtain call, I could just see him wandering around topless. I’m not sure why he felt it was worth it since he was back on stage about 2 minutes later in the same outfit, but I guess he was just really hot.

This show was Yamabuki’s 100th show and we knew in advance that they would be commemorating this by taking a photo with the audience and saying a few words, as they usually do in these cases. What no one expected, as he had his own show that evening, was for Shota to turn up as a surprise for both the cast and audience, to join the celebrations. I was almost in tears when he came on the stage, seeing the reaction of the other Yamabuki members (Mashiro in particular was crying a lot and wouldn’t let go of Shota), and just seeing Shota on stage as himself. At that moment I was so happy that I hadn’t been able to get to Samurai Mode that evening, as seeing him as himself like that in the setting where I first fell in love with him was far more fulfilling than seeing him in character an extra time would have been.

My mini-pillar wasn’t so lucky this time as I got Oshitari and Gakuto, and I didn’t have much time to wait outside the venue and trade because I had to check into my hostel before 11, but I passed it off to Emma who was wonderful enough to manage to trade it for a Jirou for me, so it didn’t turn out to be so unlucky after all.

With that, I went back to my hostel to end my lucky day, with thoughts in my head about seeing Samurai Mode and the Live Viewing of the final of Seigaku vs Hyotei the next day.