On July 14th, I finally got my birthday trip. Despite it being 10 days after my birthday, I still called it my birthday trip because I didn’t do anything special for my actual birthday, and the money I took with me on this trip to pay for everything was given to me as a birthday gift. I have a whole bunch of reports to write about the things I went to see during the four days I was there, but let’s start with some fun things I did on Thursday.

To begin the morning (after spending some time hibernating in my usual seat at the McDonalds in Ikebukuro) I was able to invade Steve’s reserved room at karaoke! Thank you! Karatetsu currently have a collab room for Tenimyu’s Seigaku vs Hyotei, as well as collab drinks with free random coasters. As with everything else during this trip, it was perfectly timed and I was really happy that we were able to go. I realised afterwards I missed a few pictures when I was taking my photos, but here are the ones I got. Included is my selfie with Ryoma (that I took after being on a night bus for 6 hours hence why I look half-dead).

We had two hours in the room and decided to try one of each of the four collab drinks, to make our time worth it and get hold of four of the free coasters you got with the drinks. Honestly by the time the last drink came out I was ready to never see another drink again in my life, and I don’t think I ever did finish the last one before we had to leave, but hey, at least I got my coasters… which, by the way, I wasn’t particularly lucky with.

Full of drinks and woken up from all the singing, we headed to our second destination of the day. Back in May, Izaki had an interview in a magazine in which he recommended these fruit tarts from a cafe/store called Qu’il fait bon. Both being his fans, we had decided we should try it out too, and this was the perfect opportunity as well as being a late birthday treat for both of us. We went to their Aoyama store, which was a bit of a walk from Omote-sando Station, but well worth it.

If you look at their menu you will probably wonder how on earth it’s possible to choose from so many delicious looking fruit tarts, and we had the same problem. Luckily we had to wait a little while for a seat in the cafe so we had plenty of time to agonise over which ones we should choose by looking at the display case. Even once we had taken a seat we still had to look through the menu again to double check.

In the end, we bought a slice of their Tropical Fruit Tart, Strawberry Tart, and two slices of chocolate cake (which kind of went against the point of us going there for fruit tarts, but it looked delicious and I have a huge weakness to chocolate cake. 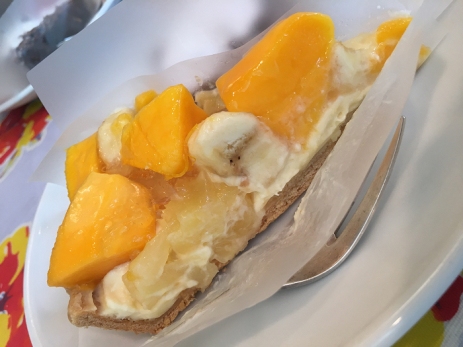 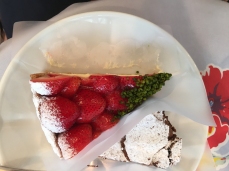 They look delicious, and they were! Like Izaki, I highly recommend them if you’re ever in an area where there’s a store. You can check their website I linked above for where the stores are. Most of them are in Tokyo but they have a few in other locations. I wouldn’t recommend them as a complete lunch as I was half-starving by the early evening, but nor would I recommend eating and then coming here because you want plenty of space for all that fruit tart, right? It’s fine to switch your main and dessert occasionally, I guess.

And with that, we headed off to watch Seigaku vs Hyotei’s first show. But that’s for another blog…