So, I am now 33 years old! Both the numbers in my age are the same for a year. Well, actually my birthday was on Monday, but it took me this long to actually have time to post a blog about it. I don’t really pay much attention to ages, but I do try and pay attention to my birthday, because I figure it only happens once a year. I was really happy to be wished happy birthday by so many people on Twitter and Facebook even when it had only been my birthday for a few seconds. I have such awesome friends.

I had decided to work on my birthday this year even though I usually take it off, because I had only two classes on my schedule, and both had good kids who I knew wouldn’t make me too stressed. I was right, too. The second class I taught now only has one student, and he’s one of the most enthusiastic, smart kids I’ve ever met. He’s in 6th grade doing a level that is generally meant for 8th graders, and does it far more easily than a lot of the 8th graders I’ve had doing the class. Although he complains that he’s tired a lot, he still always trys his best. I was perfectly happy to teach him on my birthday.

Going back to before work though… Since my classes didn’t start until 6.15, I decided to go and sit at the BoyMen cafe for a while so my birthday wouldn’t seem like a complete waste. I bought three drinks (two colas, since I’m addicted, and an onion gratin soup), and this was how it went: 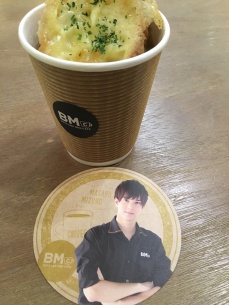 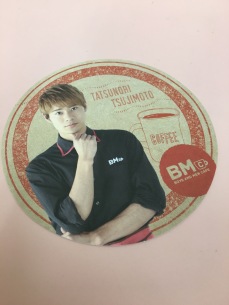 Trust Tamura to appear on my birthday. I was pretty happy to get Masaru, although how I managed to get three out of five of the Yankee 5 members in one go I’m not sure. To this day I still don’t have Honda, though.

Also, I took some pictures of the new summer display in the BoyMen shop, where the BOYS AND MEN guys decorated caps, and the Kenkyusei decorated shoes. 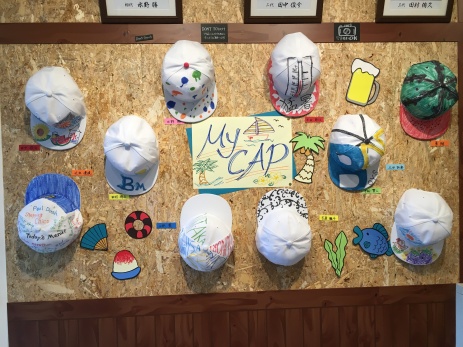 I love that Setsura just decorated his shoe like a sneaker. And, I took a closeup of Rikuto’s because I was impressed by how much effort he put into drawing all of those scales.

On Wednesday, we had our twice a year big meeting with the native staff and Japanese teachers. It was a long and pretty boring day, but because this meeting always falls close to my birthday, me and a couple of my coworkers have made it a tradition to go out and celebrate my birthday with a meal after the meeting. We went to a tapas restaurant owned by one of my coworkers friends, which we’ve been to about four times I think. It’s a really nice place, good food, and it feels really homely and relaxing since my coworker knows the owners. Our tradition is basically that we don’t go along with the rest of the group who go out together, and instead basically tell everyone we are tired and going home and then go and celebrate in our own way. It’s kind of sneaky, but it’s always worked out perfectly. One of our group arrived late because her meeting ended later than ours, but she stopped off on the way and bought me a birthday cake which was so nice of her.

They also all sang Happy Birthday to me, which ended up being joined by half of the restaurant, which was super embarrassing but I guess you have to expect that kind of thing, and I did appreciate it.

Anyway, my real birthday treat is going to be next Thursdsay to Sunday, where I’ll be spending four days in Tokyo. My schedule is as follows:

It’s going to be a busy four days, but a fun one! I’m sure I’ll be reporting here when I get back.